In a Hut in Haiti, Waiting for Spirits 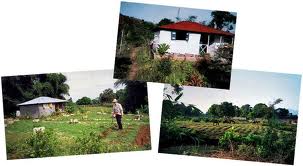 I had a house in Haiti, in the hills above the North Atlantic coast. The house appeared as if out of a dream: my dream to have a foothold in the country. Like many concepts do in Haiti, the phrase pied à terre became literal, material. Foot on the ground. The ground, when I first saw it, was planted in manioc and sweet potato. All trees but a single mango had been cut down, either to make way for those plantings or to make charcoal. My Haitian partner in building the house, an artist by trade, put his initials on the single mango so the neighbors would not turn that one into charcoal, too. The house was the traditional one-room affair known as a ti kay. It was made by the stick and wattle method, which involves the interweaving of twigs and branches, and the corner posts were connected by split bamboo. Once the walls were completed some cement was plastered over them, and a tin roof was affixed to the corner posts, with an intentional six-inch gap between roof and wall that was closed with wire mesh to keep out rodents.

A truly traditional ti kay would have had a thatched roof rather than tin, walls plastered with mud rather than cement, and a dirt floor rather than a poured concrete one (which also had an eight-inch rim in case water from the nearby ravine should rise). An additional refinement was a tiny gallery straight out the front door, with a whitewashed railing and gate, just barely large enough for two chairs and the people sitting in them. The house had two doors and three windows, two flanking the front door. The third window, about 18 inches square, faced the east and — doubtless by design of my artist friend — neatly framed the mountain peak where stands the Citadelle La Ferrière, the fortress that was erected by Henri Christophe, first and last king of Haiti, and is as improbable a sight there as a grounded ocean liner. On the other side of the house was a nook just big enough for me to unroll my sleeping mat and hang my mosquito net. To me there is nothing more soothing than the song of a mosquito that can’t get through the mesh to bite you. The doors were double, and closed with huge twisted iron hooks whose style goes back to colonial times. The windows, without glass, had shutters that closed the same way. The hook-and-eye relationship of these locks was so tight that the one on the front door had to be pounded in with a hammer; that done, one’s sense of security was impregnable, and yet the space between wall and roof left the interior breezy and cool.

Security was important; there was no wall around the property. My Haitian partner wanted a concrete wall; I preferred a cactus fence, for reasons of aesthetics and economy. On one side there was already a cactus hedge about 15 feet high, and very discouraging to any intruder. But it didn’t go all the way around, so the first night I spent in the ti kay I helped my friend bring in all his possessions, hoe and shovel and wheelbarrow and motorcycle, before the hooks were pounded in, leaving us just space enough to stretch out to sleep.  My friend was building a slightly larger abode for himself under that sole mango tree, but in the meanwhile he stayed in the ti kay. I appeared once or twice a year. Around the little house he planted trees; coconut palms and pineapple and mango and a cotton tree, as well as two kinds of hibiscus and many other flowers I could not name. At my insistence he also planted a pair of mapou trees, which are understood to attract spirits. Our mapou saplings were just a 20-minute walk from the ancient mapou of Bois Caiman, the spot where the slave insurrection of 1791 began, making that tree a monument to the Haitian Revolution. It was almost exactly 200 years later when we began putting our young mapous in.  One can’t do anything alone in Haiti. Sharing and cooperation are so deeply woven into the culture that sometimes it’s hard to have a separate thought. My partner came from Cap Haitien, the second largest city in Haiti, but he adapted himself seamlessly to our rural community. He quietly taught martial arts to the boys and supported the local soccer club, paid school fees for one child who’d been orphaned, and generally made himself respected, almost revered. The antiseptics and ibuprofen I brought from the United States enabled him to give first aid and treat fevers. Once our well was dug, he gave everyone water. And he took two girls (distant cousins, I believe) from a more remote area into his house so they could go to better schools.

The older girl took cooking courses among other things, and became an extraordinary chef. Crouched on the ground under the shade of a bamboo, using a single iron cauldron on a charcoal brazier, she could produce all the classics of Haitian cuisine: goat stew, chicken with green cashews, and her specialty, a dish made of land crabs that I have never tasted anywhere else. Half a dozen schoolchildren got their main meal of the day out of her iron pot, which earned a lot of local goodwill. When we needed to set posts for a bamboo fence, men with machetes walked out of the woods to help us. When my friend was attacked by bandits during a moment of general lawlessness on the heels of a botched election, men with machetes walked out of the woods to drive them away. With such activities, our home began, as I had hoped, to resemble a traditional lakou. Lakou is the Creole word for “courtyard,” but it means a whole lot more: the dwellings of an extended family group, sharing shelter and water and food and cropland under the aegis of ancestral spirits. Relations within a lakou prove the value of familial blood ties, while relations from one lakou to the others prove the value of universal human kinship. Each lakou is a cell in a network; there is no hierarchy, or no permanent one, so that an enemy can’t destroy any part of it without destroying all the parts. This structure made the Haitian Revolution a success, and has enabled a dauntless resistance to slavery, in all its forms, ever since.

Of course, my friend and I couldn’t claim all that. I was a foreigner, a blan, and he was a newcomer to the zone. Still, every morning that I watered the mapou, I could hope and believe that a spirit would come. When my friend turned over the ti kay to me and moved to his own house under the mango, I bought two handmade ladderback chairs at the Cap Haitien market. My furnishing pretty well stopped there. I wanted (though I couldn’t have said so at the time) to use this space to drain away my old personality and see if I could get by without forming a new one. At night I’d light a candle I had fixed with wax to the floor; it was one of the slender white candles that are sold under the brand Magic Light and called by Haitians bougie balèn. I would then pour a little water round the candle’s base, and pray — the simplest of local rituals.  Prayer, then sleep. In the little house in Haiti I slept without dreaming, sustained in our lakou as if in a hammock, our lakou afloat in the web of all the others surrounding it. It was for that I kept the house bare; the quiet catharsis of dreamless sleep. Haitians believe, if a vessel is empty, a spirit will surely arrive to fill it.

Madison Smartt Bell teaches writing at Goucher College and is the author of a fictional trilogy about the Haitian revolution, as well as a biography of its leader, Toussaint Louverture.