A Haitian Slum Gets a Makeover - But Now What? 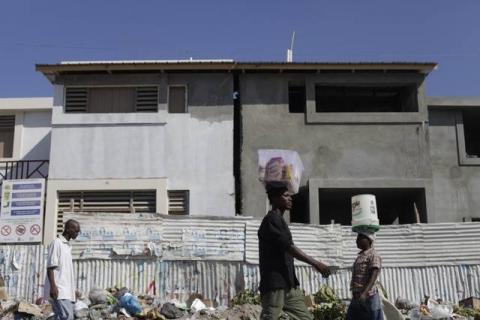 The Miami Herald’s Jacqueline Charles has covered the re-development of the Fort National neighborhood in Port au Prince. This project required extensive consultations with residents, community leaders, and gang members to even begin. Port au Prince, with its ever-growing population, has no shortage of neighborhoods where electricity, water, and common spaces were an afterthought.  Long term planning that incentivizes multi-level housing and more orderly layouts could help make these neighborhoods more livable over time.

At the top of the hill where an old colonial fort overlooks the immaculate grounds of a razed presidential palace, newly built sidewalks and widened alleys lead into new residential communities being shaped by tree-lined courtyards, indoor plumbing and towering condominium-style apartments.  Below, bulldozers move listlessly from one partially-built concrete structure to another along a once battered Rue Estimé as construction workers beat back scorching heat and hammer as fast as they can.  “Imagine if all of the houses were like this,” Ulrick Gilles, a 40 year-old unemployed husband and father, said from the confines of his newly constructed government-subsidized second floor apartment in one of this capital’s most quake-ravaged neighborhoods. “Even if you couldn’t call it a paradise, it would still allow people to live better lives.”

A haphazardly-built and volatile slum that foreign donors and international aid groups once shunned, Fort National is getting a long-overdo makeover courtesy of a little used co-property law that finally allows Haitians like Gilles, who lost their houses in the cataclysmic Jan. 12, 2010 earthquake, to be homeowners again.  Though the law initially came into existence in 1974 and was strengthened in 2009, it wasn’t until former President Michel Martelly issued more protections in a 2011 executive order that the government and international community dared use it. “You’re slowly seeing the transformation of a neighborhood,” said Claude-André Nadon, senior program manager with the United Nations Office for Project Services (UNOPS), which has built 600 new housing units and repaired more than 1,200 in eight neighborhoods since the disaster left 1.5 million homeless. “This place was a disaster zone.”

Fort National’s transformation comes as 61,302 Haitians continue to live underneath squalid tents, and as Haiti and foreign donors continue to face enormous challenges in providing permanent housing amid dwindling aid dollars, and a deepening political crisis. The country’s failure to replace the 100,000 houses leveled by the quake by all accounts has been the biggest failure of the reconstruction response. Haiti and U.S.-financed housing projects have been slammed for shoddy construction and unaccountable contractors while both governments also have come under fire for failing to follow through on housing goals.  But if there’s anything close to a model of the lessons learned over the years, it is Fort National. The construction of almost 300 single and condo-style units, installation of street lights and the rehabilitation of water kiosks and streets may seem small. But supporters note that it’s changing the facade of an informal settlement, and providing employment and training to locals in proper and anti-seismic construction techniques.

“I am not just hiring five guys; I am hiring everyone from the neighborhood,” said Nadon. “So when that guys asks for an extension [on his single unit] he’s going to ask the foreman and that foreman now knows how to do it properly. Their way of building has completely changed.” Said Clément Bélizaire, executive director of Haiti’s Housing and Public Buildings Construction Unit: “The housing is very nice; well-built; the engineering? A-plus. But the real success of Fort National and everything that has had to do with housing, is the change of mentality.”

Nadon and his team first visited National in 2011. They spent three years negotiating with gang leaders and community residents to launch the project, and then with skeptical residents to give up their plots and shacks— sometimes barely larger than a bedroom — in exchange for decent corridors, public spaces and a 376-square foot apartment. “In lot of cases people didn’t want to move,” he said. “All would say, ‘Haitians don’t like living on the second flood; they don’t want to live together.’ ” Eventually, many would agree. Some would even donate as much as 80 percent of their land back to the community in order to allow the chaotic landscape of vacant plots and sweltering tin and tarp-covered shacks to be transformed.

“Haitians are no different from a guy in Miami or Canada. They want to live in a decent home,” said Nadon. “[Eventually] they understood that in order to have something like this, you need space. You need space to put septic tanks, you need space to have water pipes coming in, you need space to have the trees. After a while they get it.” Bélizaire, the housing czar, said the co-property law makes a lot of sense in a densely populated Haiti, but “the social mobilization to get people to think rationally and not selfishly” is quite a challenge. “We’re living in the city and we want to live in rural mode,” he said. “Everybody wants to have their own yard; everybody wants to have their own house; nobody wants to share walls with neighbors. When you share a wall, you cut the costs. We have to start thinking multilevel housing.”

The concept first surfaced months after the quake when then-President René Préval vowed to rebuild Fort National. Préval dispatched government bulldozers to remove rubble. He also asked international aid organizations to re-direct cash-for-work dollars to the slum, and he tapped the head of his state construction agency — and eventual presidential pick — Jude Célestin to build two-by-three-feet wide units for 6,000 displaced families. Célestin, an engineer who is once more seeking the presidency, proposed constructing multistory apartments instead. Some $174 million was approved for Fort National’s reconstruction by the parliament as part of the budget, and the no-bid contract was given to a firm owned by a powerful Dominican Sen. Felix Bautista.

But 2010 presidential elections would bring chaos and a broken promise. A newly elected Martelly scraped the Fort National project, and reallocated the funds to initiatives. Among them: 3,000 units at Morne-a-Carbrit on the outskirts of Port-au-Prince that were so poorly built by one of Bautista’s firms that Bélizaire’s housing division refused to accept many of them. In recent weeks, the original Fort National project has come under scrutiny as a Haiti Senate Ethics and Anti-corruption Commission raises questions about the awards, and Bautista’s relationships with Martelly and some Haitian officials. Headed by Sen. Youri Latortue, a one-time Martelly adviser, the probe is supposed to focus on a decade’s worth of government disbursements under Venezuela’s Petrocaribe discounted-oil program. Most of the focus, however, has been on the already investigated Bautista contracts.

Former Haitian Prime Minister Jean-Max Bellerive who awarded the Fort National contract to one of Bautista’s firms, has said it was done so legally under an emergency law. He calls the Senate inquiry a “political witch hunt,” and has accused senators of trying to make him a scapegoat because no one can say what happened to the $174 million, including $22 million he disbursed under Martelly for the homes. “Do you see 20,000 [new] homes in Fort National?” Bellerive said on Vision 2000 radio station. “That is what I contracted for.” The challenges of building in an existing community are visible along Rue Estimé where new construction is interrupted by pockets of empty lots. “There is nothing there because one guy has refused, for many reasons,” Nadon said as construction workers move up and down the main street. “Sometimes it’s because they are scared it’s not going to happen, or it’s pressure from other people who don’t want the project to succeed.”

Unfortunately, the project is nearing its end even as the needs remain “endless” Bélizaire said because the $20 million in funding from Canada, the U.N. and two other donors has run out. Despite Haitians reluctance to share a wall, he said, the government is finding success with multistory dwellings. Similar constructions were done in the low-income communities of Morne Hercule and Morne Lazarre. The U.N. first applied the co-property law in Morne Lazarre to build three-story condominiums. “Fort National benefited from what we did in Morne Hercule and Morne Lazarre,” Bélizaire said, hoping donors keep the revitalization going. “There’s a big difference between showing somebody something on a nice layout plan, 3-D designs and pictures and when you actually take the people, put them on a bus and bring them to...talk to the beneficiaries.”

Fritzner Oriol’s two-story tin shacks sits in the middle of a palm tree-lined courtyard of yellow and lime colored apartments. He proudly boasts that he turned several of his distrusting neighbors from skeptics into believers that the program was good for the long-neglected community. Ultimately, there was one person Oriol, 49, could not convince. “One of my sisters doesn’t agree because she wouldn’t get any benefits out of it,” Oriol said, explaining why his shack is the only un-built structure in the courtyard. “There are a lot of beautiful houses inside these corridors,” he said. “When people see them they say, ‘These houses should be on the main street.’ They aren’t the kind of homes you hide in a corridor. I am a product of the neighborhood, I know what I am talking about because I know what kind of neighborhood we had.”