"Haiti From Below" Released 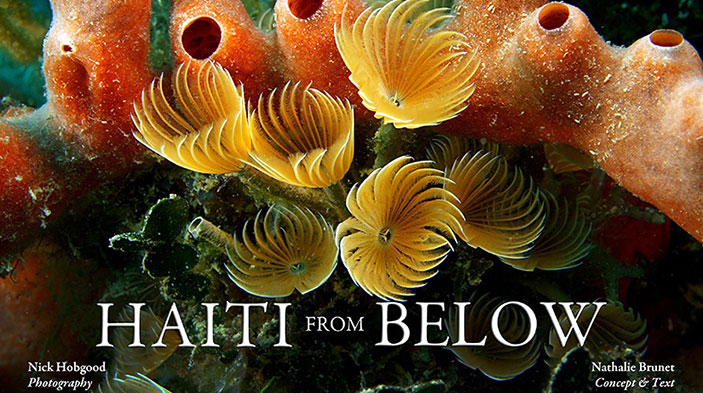 While working as a regional advisor on a DAI project in Northern Haiti, Nick Hobgood spent much of his personal time scuba diving and taking photos of the marine species he saw along the coast. The photos he collected from 2007 to 2010 have been published in a coffee table book called “Haiti From Below.” Proceeds from sales of the first 250 books go to Reef Check Foundation to support EcoDiver training on the north coast of Haiti. The book—with more than 100 gorgeous photos of coral, algae, and fish—came together with the help of the Haiti project’s former communications director, Nathalie Brunet, who wrote most of the text in the book. Nathalie, who now owns a small consultancy, Ayiti Nexus, collaborated closely with Nick on encouraging the Haitian government to create a marine-protected park—in a country where the marine environment is severely degraded.

The overall goals of the book’s publishing, said the authors, include raising awareness of the degraded state of the coral reefs in Haiti, encouraging a national action plan for their preservation, and attracting coastal eco-tourism to Haiti. “Haiti’s reefs were my classroom when I first learned to dive,” Nick said. “Although still an amazing place full of vibrant marine diversity, I was shocked by the degradation that the reefs had suffered over the last 30 years. I am happy to be able to share this beautiful place with others while at the same time benefiting a great cause, by donating all the photography proceeds to Reef Check, an organization determined to protect and restore Haiti’s marine patrimony for future generations to enjoy.” Nick continues his environmentally focused development work in the South Pacific Islands, on the U.S. Agency for International Development’s (USAID) first project in some of those countries, the Coastal Community Adaptation Project. “Haiti From Below” can be purchased through reefcheck.org and imagineayiti.com.

Some text and scientific data provided by the Reef Check Foundation accompany the pictures to explain the cause and effect of the reefs’ destruction/preservation, including an overview of the economic, social and cultural panoramas. Also included are some brief historical accounts of Columbus, the Buccaneers (“Boucaniers”), their role in smoking meat in the Fort Liberté Bay for the Pirates on Tortuga, and other anecdotes. The overall tone is light, for an easy-read and general appreciation of the pictures.  The authors will donate 100% of the proceeds of the first 250 books to Reef Check Foundation to support EcoDiver training on the north coast of Haiti.