The Grinder: One Community's Journey Through Pain and Hope (By Lee Rainboth) 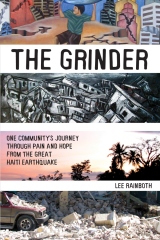 Lee Rainboth, editor of the always insightful and often humorous Green Mango Blog, has completed a book about living in rural Haiti after the earthquake.  While the quake is the defining event of the book, it is more about how a community come together after a loss and moves forward together.  You can purchase it directly at either Create Space or Amazon.  A portion of all proceeds will be devoted to community projects in Mizak.  Please consider purchasing the book at either site and then post your thoughts about it in the comments section below.

Many books have been written about the earthquake in Haiti, some by well respected experts in their fields and others by survivors sharing what they went through.  Like so many others, I was affected by the earthquake although I was living far from the Capitol at the time.  I thought I could provide a different perspective on the earthquake and began writing a book, which I called “The Grinder: One Community's Journey Through Pain and Hope from the Great Haiti Earthquake ”.  However, what began as a book about the earthquake became a narrative about the depth of the Haitian spirit, community resilience, and the way in which all of (both Haitian and foreigner) have to depend upon each to make it through.  The earthquake helped me to understand what it meant to truly be part of a community even though I had been living in Haiti for three years.  The book is about more than the earthquake just like Haiti is more than natural disasters.  While the memory of the earthquake slowly fades from the memory of the world, as does happen with natural disasters, the sense of community stays with me, provides strength, and is timeless.  I wanted to share this with others to help them understand Haitians not as victims of a never-ending cycle of tragedies – but as survivors with a proud history, strong culture, and amazing resilience. Below is the preface of the book:

“When people find out that I survived the earthquake they seldom know how to react.  In recent years, most coming to Haiti probably were inspired to do so because of the earthquake and find it hard to believe that there were any foreigners involved in the country before that.  It’s easy to assume that people that look similar to ourselves and come from a similar geographic origin probably have a similar story to our own.  We expect the survivor stories to come from people who look like the Haitians that we saw on the news in those days following the quake and we don’t expect their stories to have anything in common with our own.  Because they exist on the other side of the lines that we draw between the people needing help and the people who can provide help.  And somehow life is easier to muddle through when all the people on each side of that line have one huge generalized story for each other.  That’s when it’s clear what pronouns we are supposed to use, “us” and “them”.”

When we take the time to hear the stories of individuals, as they themselves tell them, that line starts to fade because we ourselves become part of the story.  With each additional story that is told and heard, the lines fade more and more until we recognize the joy, loss, and struggle that is part of the human experience – no matter where we come from, where we live, or what we do.  This book is my invitation to you to become a part of a story – not just of what I lived through during the earthquake, but more importantly of the community that lived through it with me.  The community of Mizak, which even most Haitians will never have heard of, is a rural area near Jacmel on the Southern coast, far away from Port-au-Prince and the devastation that was seen on the news reports in the days after the quake.  Mizak felt the literal and figurative aftershocks of the earthquake.  This book is an attempt to share their perspectives, their experiences, their story.

The stories represented in this book were collected in the months following the earthquake as a project of Living Media International as a sort of therapy through creative expression. It was a way to remind each other of the beauty that remained in life.  Early on after the quake all anyone could see was the ugly. Through providing an opportunity to sit down and share their stories and get them down in writing we could together look to what we still had and hope for better times ahead.  In the casual conversations with neighbors everyone would tell what they had lived though it was easy to focus on all the bad things that had occurred.  By structuring people's story telling with a more concrete goal in mind and in an environment of support and understanding, they could process the fears more effectively and begin to see beyond them.

No names have been changed as those involved wanted to be true to their stories and agreed to having them included in the book.  For some, this was their only hope of having their voices heard beyond their immediate communities.  These stories deserve to be heard.  I am fortunate to be considered a part of this community and am honored that they would trust me with their stories in this way.  Though many issues are explored such as humanitarian aid, religion, and racial identity, the intent is not to analyze such issues so as to arrive at any conclusion but simply to show their role in the big picture.  As noted throughout the book, endless commentary has been produced to try to make sense of the earthquake and what came after.   We can forever ask why and try to explain something that cannot be explained, or we can step forward towards a different future to begin to understand each other, the world we live in, and our places in it.  Stories help us to connect with each other.

By reading this book, you not only are agreeing to open yourself to a different perspective and see what it’s like in someone else’s shoes, but you are agreeing to help carry the load of those who must walk in those shoes (or without them as the case may be) daily.  By reading you are sending a message that their stories have value and their struggles are also our struggles.  Although you may never meet any of these individuals who are represented by the stories in this book, by turning the pages you are stepping into their community and walking alongside them as they work toward a better future worth surviving, worth living, and worth fighting for.

About the Author:  Lee Rainboth is a visual artist, nonprofit manager, traveler, and storyteller. He is a cofounder of Living Media International and currently serves as the organization's Executive Director.  He lives in Mizak, Haiti where outside of the nonprofit he also sings, writes, and performs with a rap group, Prophetie Squad, and manages a soccer team, L'Union.  He is the creator and author of The Green Mango Blog, a site dedicated to thoughts on international service and living based on his experiences in Haiti and elsewhere.

About Mizak: Mizak is a rural community just west of Haiti’s artistic capitol, Jacmel, and 35 km south of Leogane, the epicenter of the earthquake.  This community was on the outer edge of the area affected by the quake but suffered from the effects nonetheless. Mizak has a population of 17,000 people, but due to the lack of educational opportunities many young adults leave the area to search for training, university programs, or employment in the cities of Jacmel and Port-au-Prince.  This provided for a wide variety of stories to create the picture of what this disaster meant to the community.

About Living Media:  Living Media International is a nonprofit dedicated to facilitating creative collaborations between community associations dedicated to arts and education.  It was founded shortly before the earthquake in 2010 and continues it community programs in Mizak and Jacmel to encourage more creative leaders to bring about new way to share the beauty in life both locally and internationally.  More information at www.livingmedia.org