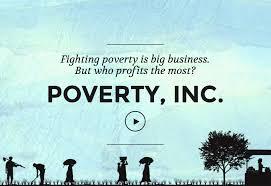 Poverty is more than an absence of resources.  It is often a result of exclusion – especially from systems of trade and productivity.  Truly helping countries like Haiti often does not entail giving things so much as being willing to give up things ourselves.  As an example, the documentary raises former President Bill Clinton’s leveraging/forcing of Haiti to drop tariffs on imported, subsidized US rice.  Doing so was beneficial to American farmers but Haiti’s non-subsidized rice industry didn’t stand a chance.  While it is true that Haitians were often able to purchase cheaper rice as a result, many jobs were lost and Haiti become exceedingly vulnerable to price shocks when the cost of imported rice would spike. Many (but not all) donor countries prefer to fund a range of non-threatening assistance programs rather than to open up trade opportunities that could threaten their own economic interests.

Trade is critical to Haiti’s development.  Competitive and socially responsible companies like Digicel do more for sustainable job creation that most NGOs will ever be able to.  The private sector can help produce the leaders that the country is very much in need of.  Aid sometimes works at cross-purposes with economic development though.  The documentary team interviewed the founders of ENERSA - a small business created by Haitians, managed by Haitians, and employing Haitians that produced solar panels for street-lighting.  After the earthquake, ENERSA could not compete with the huge quantities of solar panels being imported by NGOs and given away for free.  ENERSA tried to sell their panels to the NGOs at a reasonable rate but most preferred to import solar panels from their respective countries.

The documentary emphasizes that the best NGOs are trying to work themselves out of a job.  If an NGO is doing the same things for decades, then further examination is needed as to its motives and approach.  Dr. Timothy Schwartz is interviewed at various points in the documentary about this. Schwartz, the author of “Travesty of Haiti: A True Account of Christian Missions, Orphanages, Fraud, Food Aid and Drug Trafficking”, began to question the intentions of international NGOs after his experience consulting for CARE in northwest Haiti, traditionally one of the most food insecure regions in the country. He determined (as did consultants before him as it turned out) that CARE was causing great harm by monetizing imported and subsidized food with which they were flooding local agricultural markets when harvests were good and not distributing when harvests were poor.  This has become a textbook example of an NGO that caused more harm than good through its presence and activities.  These experiences help to explain why Haitian farmers are wary of other countries offering peanuts and other excess agricultural commodities in the name of assistance.

Schwartz then accepted a follow-up consultancy with the same organization to look into the possibility of expanding support to orphanages. He determined that the vast majority of children in orphanages did indeed have families – albeit families that had too many children to take care.  Fund-raising for orphanages is generally much easier than for family planning which prevent the need for orphanges. When times were hard, Schwartz found parents would put one of their children in an orphanage where they knew he or she would be fed and potentially have access to a decent education or even international adoption.  A family interviewed in Poverty Inc. travelled to Haiti to adopt a child but quickly came to the same conclusion as Schwartz – that there was something deeply wrong with children being in orphanages when they have families already.  The family decided to stay and to create the Apparent Project, an arts and craft program that would employ vulnerable mothers so they could take care of all their children instead of placing them in orphanages.

I do not mean to be overly had on NGOs.  There are some NGOs doing great work in Haiti – the best of which are focusing on building the capacity of Haitian individuals, organizations, and institutions.  Some NGOs are providing training and micro-credit to Haitians so they can become entrepreneurs.  This is very useful given that in Haiti and other countries like it, credit can be very to secure without exorbitant interest rates.  Others NGOs have helped develop hospitals with the understanding that the Haitian Ministry of Health will eventually assume full leadership.  Still others focus on reforestation and promoting alternative energy sources. Still, Poverty Inc reminds us that hard questions need to be asked about aid.  Do programs represent what communities and institutions want?  How do we know? Is the aid empowering or disempowering? To what extent are Haitians managing the programs and could they continue to do so without the NGO?  Are there any unintended consequences and what is being done to address them?

Check out the Poverty Inc. trailer.   The full movie can be watched on Netflix, ITunes, and other video-streaming services. Screenings are held throughout the year or perhaps you would like to hold you own.  If you want to get involved check out the Poverty Inc Call to Action. Feel free to share your thoughts in the comments section below.