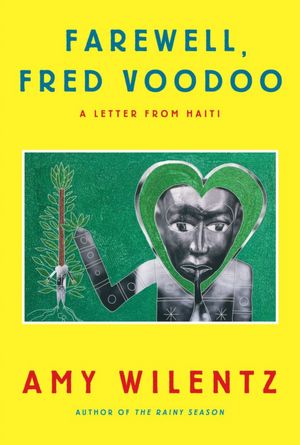 Amy Wilentz understands Haitian culture, history, and language as few other foreigners do.  This, combined with candor about her own biases and emotions, makes her a compelling writer about a country where nothing is black and white.  Like many of us, she seeks redemption of a sort through Haiti.  Throughout her most recent book, "Farewell, Fred Vodoo", she emphasizes that Haitian perspectives are the best ways to understand the reality of post-earthquake Haiti.  Below is a review by Hector Tobar of the LA Times.  More information about the book and upcoming readings are available on Amy Wilentz's website.

When an earthquake struck Haiti in 2010, killing thousands, Amy Wilentz tried to stay away. This wasn't easy for her to do. The Haitian people, their language and the unique beauty and madness of their country have been her obsession for a quarter-century.  Indeed Wilentz, a Los Angeles writer and award-winning journalist, knows Haiti as well as any American writer has known a country that's not her own. Wilentz, author of the acclaimed book "The Rainy Season," didn't go to Haiti because she couldn't stand the idea of seeing that country of proud dreamers treated as just another group of pathetic disaster victims. She knew she'd have to witness the "sheer awfulness" of all the aid groups that would be fighting one another "for a piece of the Haitian action." "I was trying to outrun Haiti, to evade it before it took me over once again. In vain," she writes in her excellent and illuminating new book, "Farewell, Fred Voodoo: A Letter from Haiti." Two weeks after the earthquake, she hopped on a flight to Port-au-Prince.

She describes her reencounter with the orphan boys she'd first met a generation earlier — now middle-aged men navigating a rubble-filled city. She wanders, unafraid, into familiar old shantytowns and new refugee camps, including one that's been built by a Hollywood movie star. "Farewell, Fred Voodoo" is a love letter to — and a lament for — Haiti, a country with an already strange and tortured history that became even more tragic, interesting and convoluted in the months after the earthquake that killed 316,000 people. Actually, Wilentz writes, that figure probably isn't right, even though it came from the Haitian government. The earthquake may have killed as few as 30,000 people. Or maybe 158,000. Or 85,000. All those numbers have been floated by various officials and agencies. In Haiti, certainty is always elusive. Or, as they say in one of the many Creole adages Wilentz scatters delightfully through her book: Tou sa w we, se pa sa. "Nothing you see is what it seems." Take, for instance, the photograph of an earthquake survivor that appeared on the cover of Time magazine. He looks, Wilentz writes, "like some kind of demented vision of a zombie…a man with dust-colored debris and pieces of cement adhering to his face and a ragged blue T-shirt wrapped around his head."

A full year after the earthquake, Wilentz is entering a Port-au-Prince shantytown in search of a friend when she suddenly spots this man — with his zombie-like face still painted with debris, the same blue shirt still wrapped around his head. "I notice right away that this apparition from history has singled me out as, for the moment, the only stupid white person available who might want to take his picture for money," she writes. He's turned himself into "a living tourist attraction." Wilentz not only appreciates "the full absurdity and instrumental aspect" of Rubble Man and his costume, she realizes that the original Time photograph is itself a kind of mystery: Had Rubble Man really just climbed out of the rubble, or was it all just a show right from the beginning? Time and again in "Farewell, Fred Voodoo," Wilentz recounts events and meets people who inhabit that uniquely Haitian space between what is and what may be and what may have never been.

"Beautiful shoes still have to walk on the ground," goes another adage. The good people of Haiti tread upon a ground with a rich history that's also a curse — a history that Wilentz taps into again and again with great authority to explain the Haitian present. She weaves the ancient voodoo god Ogoun into discussions of Haiti's flawed modern-day democracy, and speaks of the 18th-century leaders of Haiti's slave rebellion-cum-revolution while discussing the grandiose, doomed plans of Western aid agencies. Wilentz does this not as some journalist affectation but rather because it's the way Haitian people themselves think.

Indeed, unlike the vast majority of reporters writing about Haiti and other developing countries, Wilentz has absorbed the idea that the locals have a radically different way of understanding their country — and that Haitian beliefs are usually better at explaining Haitian reality than the ideas of well-meaning but essentially naive Westerners.  Haiti needs to be understood in Haitian terms," she writes. It has a functioning chaos, an order in its seeming disorder. "Don't curse at the crocodile before you cross the river," goes another saying. Haitians endure condescending outsiders because their precarious economy requires them to — the country never really recovered from the slave uprising that ended French colonial rule or the U.S. occupation in the 20th century. We shouldn't be surprised, then, that Haitians greeted the arrival of yet another wave of outsiders in the wake of the earthquake with a kind of "doubling" behavior. The aid workers, Wilentz writes, were "simultaneously welcomed and rebuffed, treated with respect and lied to, deferred to like dignitaries and mocked as fools."

But it's Wilentz's honesty about her own role in Haiti and that of so many other American visitors to that country that ultimately distinguishes her book most from other works that cover similar terrain. "I often think that all the outsiders here — or at least the Americans — are in rehab, seeking redemption," she writes. "That they are seeking forgiveness for living in a country whose wealth and peace are intimately connected … to Haiti's lack of same." As Sean Penn, who helped house 60,000 refugees, tells Wilentz, "We need Haiti." In return for redemption, Wilentz, a comfortable L.A. mother of three married to Nicholas Goldberg, editor of The Times' editorial pages, brings to Haiti empathy and her great skills as a narrator. She spins tales about "werewolves," tuberculosis and Madame Coupet, a conservative Haitian mother of three who thinks Wilentz and her writing have helped destroy Haiti. To this woman, Wilentz bows her head — and listens. After a while, "she decided that I was not a demon," Wilentz writes, "and that we both loved Haiti." That love permeates every page of Amy Wilentz's powerful new book.