Haiti Innovation is proud to be partnering with the Centre for Management Technology in the leadup to the Jatropha World 2008 conference, which will be held in Miami and focus on the potential of Jatropha as a biofuel in Latin America and the Caribbean.   We will report before, during, and after the Conference, which we anticipate will help raise awareness and bring together key stakeholders who could make the cultivation and processing of Jatropha in Haiti a reality.  Below is further information from CMT about the conference.

Ever thought that you would see the day when jumbo jets were powered by biofuels?  Thanks to Virgin Airlines, we now know it is possible.  Click here to watch the (successful) test flight and then check out this article in the Toronto Global and Mail. What does this have to do with Haiti?  Presently, not much.  But it has a great deal to do with the future viability of biofuel production in Haiti for domestic and international consumption.

Bourik (BOS) recently loaded up for a trip to Trou du Nord in the Northeast of Haiti and ran across some of the sharpest Haitians yet. A ruthless band, fearless but cautious, otherwise they’d never have made it as far as they have in this life (ages 6-10 perhaps).

Canada is a significant donor for international development programs both in Haiti and worldwide.  The country has a large Haitian population and high ranking government officials who were originally born in Haiti.  During a recent trip to Haiti, the Canadian Foreign Minister reaffirmed the government's long term committment to Haiti and new activities for partnership - activities which we believe could have a positive impact on Haiti's development.

Let's face it - life is fragile.  One mosquito bite or one glass of questionable water makes the difference between good health one day, and sickness the next. In developing countries such as Haiti, the very water needed to survive can also cause sickness and, for the young, even death.  In Port au Prince, the wealthy purchase treated water while the poor depend on  crumbling infrastructure.  A documentary entitled "Drop for Drop" explores access to water in Haiti's largest city. 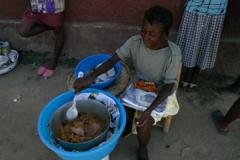 During a recent stroll to Jakzil Bourik (BOS) happens upon the unfortunate fate of a hoofed brethren in an unlikely place, a big blackened pot with sauce and yams. But he keeps himself composed and manages an interview.

When I see articles re-emerge about the clay biscuits the poorest of the poor in Haiti eat, as seems to happen every few years like clockwork, it frustrates me.  We all know Haiti is a hungry country, but communities need solutions instead of pity, and partners who empower rather than provide handouts.  Sometimes I read about well meaning groups in the United States that decide to box up food and send it to Haiti.  Well intentioned but not smart - this is dependency and not development.  Solutions exist and Kimberly Green of the Green Family Foundation writes about one in a blog she submitted to the Huffington Post.  You can read it here but i have also copied it below.

The One Laptop Per Child (OLPC) Foundation and the Inter American Development Bank recently announced a plan to ensure access to computers for over 13,000 Haitian students.  Under the plan, the OLPC Foundation will provide 2 million dollars, the IDB will provide 3 million, and UNESCO will carry out an external evaluation.  If the program is successful, and we hope it is, then it could be expanded further in Haiti and other countries.

For Peace Corps Volunteers living on the Central Plateau, Cap Haitian was a nice city to spend a long weekend in.  Sure, the road was unbelievably rough, but there are nice hotels, restaurants, and beaches. Of those beaches, Labadee is one of the nicest and is basically set aside for Royal Carribean.   According to the Miami Herald, Royal Carribean and the Haitian Government recently inked a deal to expand the cruise line's operations in Haiti significantly.

Attached is an assessment carried out by the World Bank's Energy Sector Management Assistance Program (EMAP) on Haiti's reliance on wood based charcoal for its energy needs - estimated to be about 70% of total energy usage.   Having read the assessment, I feel it raises some sensible interventions even if they do not go far enough.  However, the strategy could provide a foundation upon which to build.